Nawada city is popular among tourists for its natural beauty, temples, friendly people and rustic atmosphere. Tourists should definitely keep Nawada as one of the destinations to be visited. It is located at 24.88°N 85.53°E and at an average elevation of 80 metres (260 ft). Nawada occupies an area of 2,492 square kilometres (963 sq mi) which is almost 1.43% of total geographical area of the entire Bihar State. 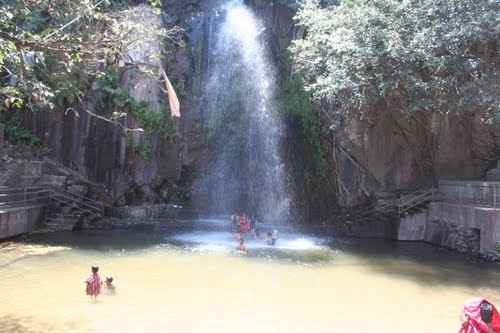 The climate of Nawada is said to be sub tropical and sub humid in nature. Nawada has a hot and dry climate and in summers the highest day temperature ranges from 25°C to 42°C and the winters temperature goes as low as 16°C. The rainfall or the monsoon season comes in the third week of the month of June and goes to last till September. Nawada receives an annual average rainfall of 1037mm. The city gets its maximum rainfall from South West monsoon. The winters are extreme cold and summers are extremely hot.

Nawada is a perfect combination of natural scenery combined with panoramic views. Nalanda known for its glorious past lies on the northern side of Nawada while Hajaribagh is located in its south. In the east, lies Giridih, a very beautiful and holy place and finally in the west lies Gaya. Therefore, Geographically it is clear that Nawada is surrounded by all these places which are hold great historical and geographical importance.Towards the east, we can find bare, rocky hills which are picturesque. The panoramic view is full of green forest area. The district occupies a total area of 2492 km². The total population is 1,809,425 as per census of 2001. The forest area is said to be 540.32, sq. Kms and Net Sown Area is 1217.81, sq. Kms. There is no important perennial river in the city, however the rivers which lie in the district are wide, shallow and even sandy. Maximum parts of Nawada district are plain however certain some of the areas have hilly characteristics as well.

Some of the rivers which are connected to Nawada are Sakri, Dhanarjay, Khuri, Tilaiya, Bhusri by Kakolat and Panchane. All these rivers conjugate at Giriyak and it is believed that this is the place where Shri Ramchandra had taken bath during his exile.The two famous dams near to Nawada are Kanke Dam and Garga Dam. The astonishing splendour of the dams and barrages is sure to take anyone's breath away. Nature's beauty combined with man's skill makes this place around Nawada a tourist hotspot as well as a weekend picnic spot for local residents.

Comments / Discussion Board - Geography of Nawada